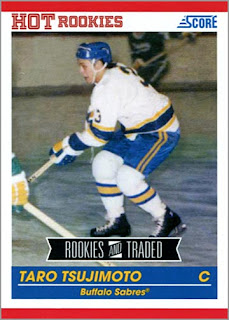 SJB over at Puck Junk has an awesome post about the Sabres 11th round Draft Pick in the 1974 NHL Amateur Draft. I won't spoil the story for you if you're unfamiliar with it but it's pretty awesome. So is the card above.

I'm really happy that Grigorenko one of the best prospects at center and perhaps the best "playmaker" in the draft fell to the Sabres last night and trading the pick that we got last year from Calgary to move up from Pick 21 to 14 was also awesome. I've heard people compare Girgensons to Lucic and that type of grit is exactly what the Sabres need. Even if only one of the two pan out it will be a success.
Posted by Joe at 9:58 AM 4 comments: 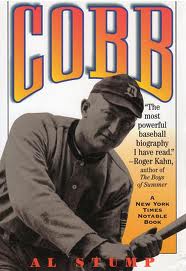 I read this book on a train ride downstate about five years ago. The train broke down in Albany and we had to wait for them to fix it. They couldn't. So we switched trains and got on our way, all in all it was about seven hours. Riding the train added something to the experience of reading this book. I always associate trains with the early part of the 20th century and the stories told in the book are from around that time so it fit in perfectly.

Much like the Ted Willams book I featured in a post last week Cobb relates the story of a very flawed man, only Cobb's flaws are much (MUCH) worse than Williams'. Al Stump, the author, followed Ty around for about a year to help him ghostwrite his autobiography, My Life in Baseball.  Thirty years later this book was published and became a film staring Tommy Lee Jones (the film is pretty good too).

While there have been claims that some of the documents used to substantiate some of the stories in the book were forged it's still an enjoyable read taken with a grain of salt.
Posted by Joe at 3:47 PM 1 comment: 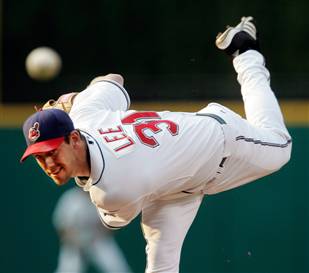 The year I won my Fantasy Baseball league a lot of the thanks belonged to Cliff Lee who's 2008 campaign was one of the greatest ever for a guy who wasn't even drafted in 90% of leagues.

Looking at his stat line today it's terrible to think that he's yet to get a win in 9 starts despite posting a sub-3 era.

So thank you Cliff, you're a great player and a class act, maybe the Phil's can score more than 1 run for you when Utley and Howard come back. Until then I hope you realize like I do that Wins are the most meaningless statistic in baseball.

One of my favorite books 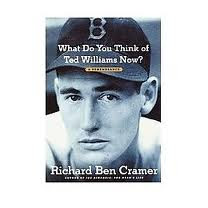 I've probably lost everyone by putting the work "books" in my title. If you're still with me then I'd like to enlighten you to one of the best books, not just baseball books, I've had the pleasure of reading. "What Do You Think of Ted Williams Now?" is the author expounding on an article that he wrote for Esquire about the titular slugger Ted Williams back in 1986 and touching on the life of the Red Sox superstar in the years leading up to his death. It's masterfully written and if you have the afternoon it would take to read it free then I would highly recommend it. You can find it relatively cheaply on Amazon.
Posted by Joe at 5:21 PM 2 comments: 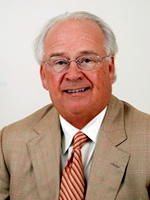 For how many times I've seen his name listed in stories related to pitchers I never once thought to look him up on Google. So for those of you like me, this is the face of the man who so frequently makes decisions that effect the lives of the pitchers we all follow, our favorite teams,  our card collections and our fantasy baseball teams. I like the tie.
Posted by Joe at 5:24 PM No comments:

Sal Maglie and my trip to Cleveland 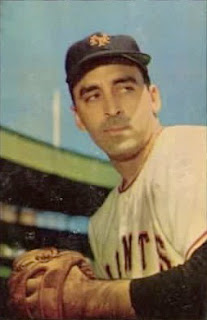 At some point in the next week or so I will end up writing about the game I saw in Cleveland where the Tigers couldn't drive in a run to save their lives. This post is about a man from "The Falls" (Niagara Falls for those of us who don't live there) who inspired an entire generation of boys from his home town. They even named their Minor League park after him.

I'll be honest, growing up in Hamburg (12 Miles to the south of Buffalo) I had no idea who Sal Maglie was. It's odd but even though the Falls and Buffalo are so close together there is no doubt they are completely separate places and that is extremely evident in the fact that while I grew up only 1/2 hour away I had never heard of this Western New York icon (check out his wikipedia page for info, etc. Sal Maglie on Wikipedia and Sal on Baseball-Reference for stats).

The trip I took to Cleveland was sponsored by the Niagara Falls Sports Hall of Fame and as such there were a ton of Board members on the trip and they all had one thing in common, they all loved Sal Maglie. The first half an hour or so we did baseball trivia which I thought I might be pretty good at but when the first question was, "What was Sal Maglie's address in Niagara Falls?" I knew it wasn't meant to be my day (for the record I think it was 2717 Pierce Ave.). Then came, "What color and type was Sal's car that he always had parked out front?" Another question I couldn't even venture a guess at, I think the right answer was a red Cadillac but I could be mistaken.

What's the point of all this? The point is that these men were remembering a time when the heroes of their youth didn't live in the hills surrounding LA but rather they still lived in their home towns. They were still real people and they were accessible. That's the big problem with sports today, the athlete's aren't human anymore; they don't live on Pierce avenue and they sure as hell don't leave their cars out on the street so you know  when they're home. I'm sure there are some players today who still show the neighborhood kids how to grip a 2-seamer like Sal did, but not many.

Sal was a good (maybe even great) player for his day and a two time NL All-Star on the field but judging by the love that was expressed for him 20 years after his death on that bus trip on the way down to Cleveland there is no doubt he was an all time great in The Falls.
Posted by Joe at 8:39 AM 4 comments:

Follow me on Twitter if you would be so kind, I plan on Tweeting from a few live events in the near future: https://twitter.com/#!/GrinMan82
Posted by Joe at 10:11 PM No comments:

Who is the best professional athlete born in Western New York?

Search This Blog, My Favorite Blogs or The Web